Wendy has been at our Great Baddow home since January. In her 38 years in nursing she’s seen it all – from pushing new care standards through parliament to winning awards. Plus, we find out about Tilly the dog and appearing on The One Show!

How are you finding life at Baycroft so far?

I love it. Although I started on 7 January, I’ve been doing lots of training and I went to Barbados (the trade off with my partner was that he would pay, but I had to watch the cricket!) so I’ve only done about 20 days so far.

But I really love it. I actually live in Suffolk, so it’s a long way to travel to work but I’m so happy. It’s like having a blank canvas, or a patchwork quilt – you’re adding to it all the time. There’s no end point in this job, and every day gets better and better.

Where were you before Baycroft?

I’ve been a nurse for 38 years and I worked in palliative care at a hospice for 12 years. I also ran a care home for about 18 years and won an award for Best Care Home Manager at the Great British Care Awards.

Plus I’ve been a nursing consultant and worked at the National Institute for Health and Care Excellence doing some projects for them. I’m a hard worker: I probably average between 60 and 80 hours a week.

One of the things I’m most proud of is a project I did with Anglian Water on hydration. People don’t drink enough water in care homes and the research I completed resulted in hydration being recognised as a national care standard.

It’s so important. When people are properly hydrated there are fewer accidents, fewer falls, residents are more awake and perkier.

What sort of things do you hope to introduce to Great Baddow?

My philosophy is that it’s not our home, it’s the residents’ home. It’s a privilege to be there – we have to remember that.

A care home is the beginning of something, not the end. Nothing is regimented. I like music in the home. Last night some of the residents and staff went to see My Fair Lady at the theatre. Some of the residents are living with dementia and they just cried and sang their hearts out. They had glasses of wine, popcorn and ice cream and didn’t get back until quarter to 12. My staff are shattered!

It’s about making this place into a family. So when we bring other residents or staff in, it’s like adopting someone into the family and making sure they fit in. It’s terribly important. 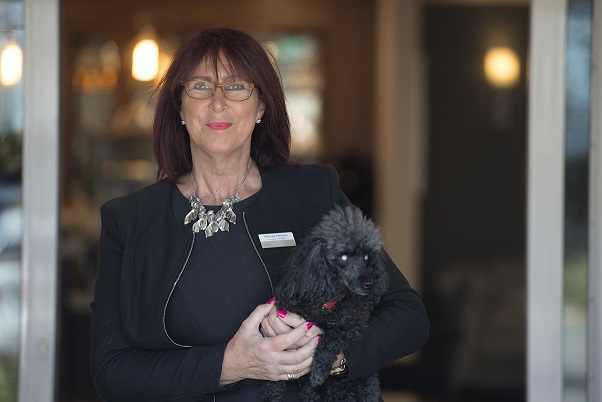 What else will you be bringing in?

Well it’s not an initiative as such, but my dog Tilly is with me all the time at the home! She’s sitting behind me right now. She’s a little black toy poodle and she’s blind. She uses sound so that she can follow me around!

The residents absolutely love her. A lot of them had animals before they moved in here so, of course, they were sad that they had to give them away.

There’s also Red Letter Day. It’s like a bucket list where residents say exactly what they would like to do, and we try to make it happen. At my old job, there was a resident whose wife had died. We paid for a taxi and a carer took him to her grave with a bouquet of flowers. Afterwards, he went to the pub for a pint of beer and some fish and chips.

He came back and said, “You know what, Wendy, I can die happy now. That’s all I wanted to do.”

Another one was a resident who was 99 years old and terrified of flying, and wanted to overcome that fear. I arranged for her to go up in a glider. The News at One did a feature about her and then someone from The One Show called me up and asked if they could also use it. So we ended up on The One Show in October! They interviewed her and she was absolutely fantastic.

Do you have a favourite part of the job?

Being with residents, absolutely.

I arrange sports days for the residents and staff. The best was when we had a resident who hadn’t come down from her room for three years. We persuaded her to do the egg and spoon race and then glued her egg to the spoon. We cheated all the way through and she won!

I’ve got all these ideas. Finding out exactly what residents want, even the little things: which newspapers or magazines to get in. We’re booking entertainment for every two weeks. It could be bands, violinists, harpists, magicians…

A lot of people who come here have been bereaved, or have lived on their own for 20/30 years. Suddenly they’re living with 59 other people – that can be difficult. It’s about being very sensitive to everyone’s needs.

Finally, who would be your dream dinner guests?

What about Freddie Mercury, Winston Churchill, Richard Branson and Gandhi?

From politics to excitement to sharing and listening: that about sums me up!

You can find out more about our Great Baddow home here.